So I came to california Tuesday morning, got picked up by my cougar step mom :]

It feels great to be back in Santa Monica and Hollywood, this place is like home

I’m not one to run away from my problems or need time away from vegas because shit bugs me but lately that’s been the case.Bunch of bullshit going on from different directions not knowing who to trust, wondering if people are playing games with you, it’s just stupid.If people could just be more real and own up to their shit I wouldn’t have a problem but it’s that don’t say anything don’t talk about it shit that just bugs the fuck outta me because I like to confront and move on.

So I decided last minute to just take a trip to cali for awhile, most likely be back next month sometime. I know out here It’ll be allot easier to just relax clear my head and spend time with family and friends that actually care about me. It gets really hard when you want to meet new people but are just afraid of what KIND of people they are. I don’t feel like figuring out people or dealing with pitty ass shit, I hate it.

See this is the difference between vegas and california

In california all the boys flock and it’s just the best feeling for some odd reason haha. 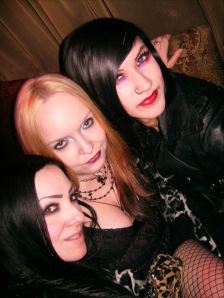 I have much more people out here to trust and talk to than I ever will in vegas.

I don’t care who has issues with who out here or what anyone really has to say about who’s fake and who isn’t, I love it out here and love the people I know.If for any reason anyone proves themselves to be shit THEN i’ll have every right to open my mouth, until then I’m good.

I want to try and come home next week though because I don’t want to get to use to being out here and then be dissapointed returning home.My mission while being out here is to just get back on my 2 feet clear my head and just block out any unnecessary shit out. I’ll deal with some other shit and people once I’m back cause it’s definitely not over.

Prove yourself, who the fuck are you cause i’m tired of trying to figure it out

By the end of this trip I plan to be slightly be changed, change is already taking action so I’ll grab a hold of it now and change some of my ways again.Change is sometimes necessary and in my case it’s needed.I’ve opened up my eyes to much more new experiences though and I’m proud of myself.

We’ll see what the future brings