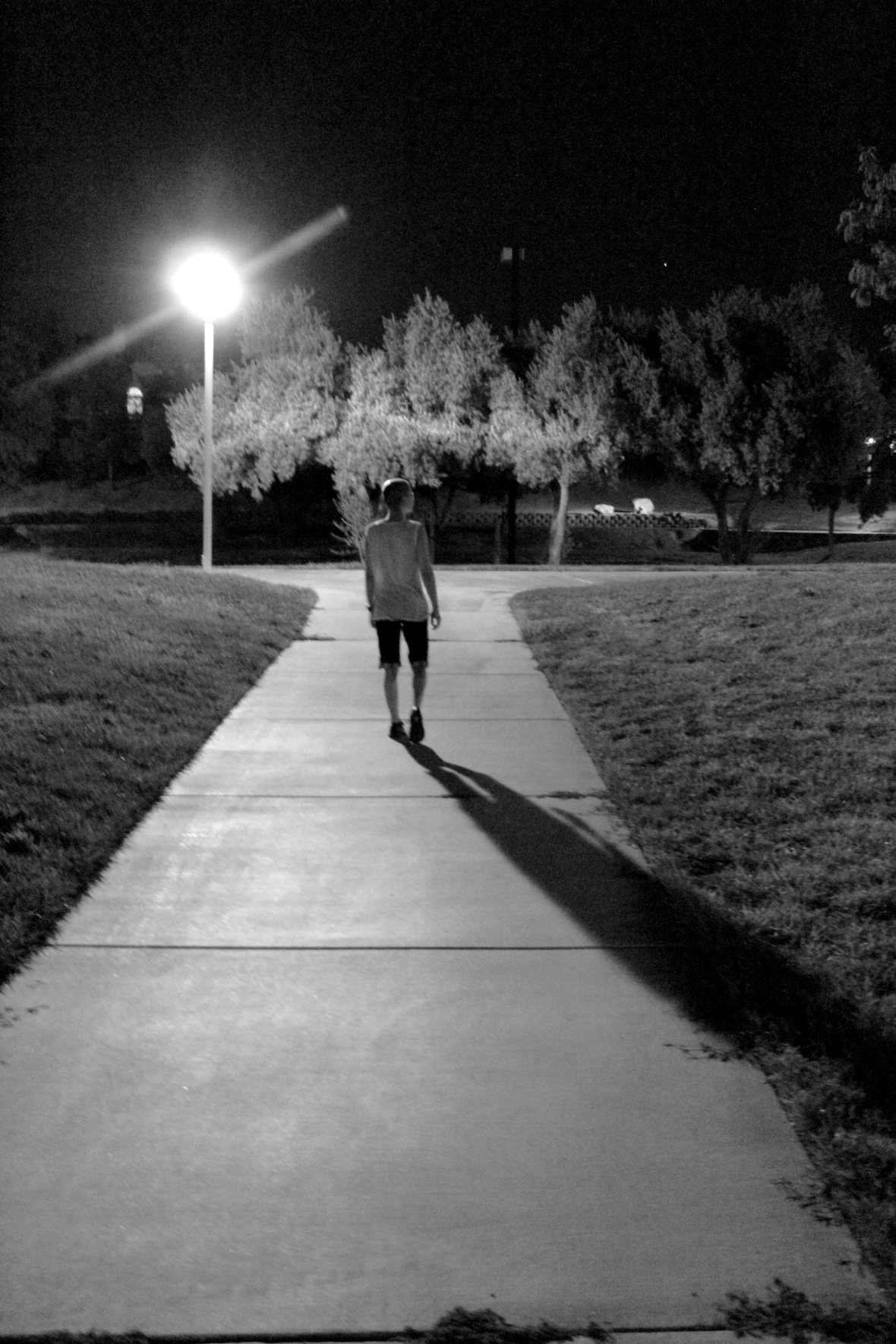 Nick took this photo of me at one of the last places we went to at the park I grew up at. I told him I wanted to put together a blog on how I miss my youth and growing up. Never got around to posting the blog but I loved the photos he took of me that night..

It’s 3am and my allergies have been a mess all damn day long. I’m eating chicken noodle soup and drinking the ‘Breathe Deep’ Yogi tea. I don’t know what about the tea it is, but that shit always helps with my scratchy throat when my allergies start acting up.

I guess now would be a good time to talk about all the dreams I’ve been having of Nick..

They tend to call these “visitations” when someone you love has passed away and enters a dream it’s supposed to mean that they want to see you.

So I’ve been told.

Since the first time I dreamt of Nick, I’ve kept a tracking of every dream and tried to figure out what each one means. I really do feel like it’s him and when I share stories with people who have had similar experiences, they too have told me similar things that have happened in their dreams like how they’ve happened in mine.

This dream was the day after he passed

I dreamt he had everyone convinced that he was dead but he was actually alive and we were at someone’s house watching shows. I kept following him around to get him to talk. I kept asking him what that stunt was about and got so mad at him because he wouldn’t talk to me. I even cornered him in a hallway and he still wouldn’t tell me because he just refused to talk to me about it.. He kept giving me this dirty look almost like I knew the answer as to why.

The only thing I can remember was us being in some sort of jungle area golfing and just spending time together.

He was helping me with stuff around the house and we had gotten new furniture we were going to put in the house. My sister was over and painted a picture for me and he added me to a group chat he had going with his friends because he was watching some videos on his phone from the trip he had just gotten back from and I wanted to know who his friends were.

He left somewhere and came back and when he walked in through the door I could feel something was different. That feeling of when you know you’re going to get broken up with. The feeling someone feels when they’re done.. I kept having the urge to tell him to not take his own life because I would hate that but in the dream I was never able to get around to it and then he left again..

He told me he wanted to show me something from the neighbor on his phone and I started to argue with him about what the conversation sounded like and who the person in the video was that he was watching… I left to the store and when I came back it’s like I knew he had passed away and a neighbor asked from upstairs where he was and I told them he passed away. When I walked into the apartment again he was gone and the apartment was completely empty.

This was a short dream and all I can remember is that he was at the front desk of a hotel checking us in. Made sense because when we first met we were always staying in hotels trying to make long distance work.

If there’s any of these dreams that seemed like he was REALLY trying to communicate with me and tell me something, it’s this one…..

I dreamt we were at some bridal party in California and I was going to the beach afterwards. He handed me his phone and I found videos of him showing “things” to people he shouldn’t be showing on snapchat. I told him that he and I needed to kind of take a break that I couldn’t handle what I saw.. Nick started crying and my friend Geo was in the dream and she had kind of grabbed him by his head to hug him and comfort him and then stepped away.

I moved and stood behind him and he was leaning over the kitchen sink and in a really serious tone of voice he was telling me that I was right and that he loved me and cared about me but he thought we should break up.

He said he would be staying in California and me in Vegas.. Like we were agreeing to both go our separate ways..

I woke up from this dream and just layed in bed almost with a sense of peace. It was weird, I was really upset but for some reason I didn’t have the urge to cry. I just felt like this was the breakup dream. This dream was on 10/20/18 a month exactly after he passed away. I’m just not ready to say goodbye or let go and even if that’s what he thinks, I can’t move on that quickly…

This was a very very strange night for me..

I went to dinner with some friends because my friend Jessica just got her real estate license so the gang all went out to celebrate. When I got home I was feeling almost like I was getting sick so I took some NyQuil and fell asleep around 2:30am. I woke up at 4:30am because I had to pee but when I got up I just had a really really strange feeling in the room.. I felt scared and it’s not like me to feel like that because hell, I can watch scary movies and go to bed and be fine and not think anything of it. For some reason the room seemed a lot darker than normal and I was looking around almost like I was checking to make sure nothing was in the room. It was so cold and I just felt like there was something there with me. I got scared and went out to the living room. I turned on a light and fell asleep on the couch which is really strange because I can’t really willingly fall asleep on the couch.

And so I started to dream

Nick and I were driving through California talking in the car just how we used to.

We went to his house and were hanging out with his family all of us talking and hanging out just like how we used to on the holidays.

There was a flashback of me speaking at the memorial again almost like he was highlighting this moment.

The dream switched, Nick was telling me of someplace really windy where if you go there you can almost blow away because of how strong the wind is.

There was a point we were all talking and there was a lot going on when all of sudden I was woken up to what sounded like a super heavy big box being slammed in the middle of the fucking living room.

I got SOOOO FUCKING SCARED. It was like some paranormal activity shit when the girl is laying in bed and hears a loud slam against her wall, yeah like that. I layed there and did not move because I had no fucking idea what that noise was. It was 8:30am and I had to be up at 9am. I was racking my brain trying to think of what packages came to my house that I didn’t send to my moms address. I got up and checked the front door and there was nothing. I then checked the patio and again, nothing. I took it as a sign of Nick telling me to wake the fuck up and start packing shit. I move on Halloween and still have nothing packed. It’s too painful for me to think of or want to do but I know it needs to get done this weekend.. I need to start moving things into the storage.. I’ve never had something like this happen. Had I not gone to the living room, I wouldn’t of heard anything because I sleep with the door closed.

Aside from all the dreams I’ve been having there have been a few mediums that have came into the salon who have sensed my whole situation and have had messages for me. I’ve never had that happen before with someone who passes away. I don’t know if it’s because I’m putting so much energy out there because of this situation but it has been very interesting. I’m just grateful for all the things I’ve been told about how he’s just in a better place. I can rest easy knowing he’s getting help and that he’s healing.

I’ll be sure to keep posting more of the dreams I have in hopes that someone will know what some of these dreams might be trying to tell me. Some feel like messages and others feel like Nick wanting to just spend time together…